HALLOWEEN – a scary use of plastic

You may think a single costume can’t make that much of a difference, but when you consider UK consumers spend millions of pounds on Halloween products, such as decorations, toys and confectionery each year, it may make you think twice about the impacts it has on our environment.

Halloween dates back over 2,000 years and some believe it began as a Samhain Celtic celebration to warn off ghosts, whilst others claim it rejoices the dead. Originally celebrated the evening before, All Hallows Eve soon evolved into an annual day of pumpkin carving, trick-or-treating and costume wearing for the young and sometimes old.

A survey funded by the North London Waste Authority and run by NGO Hubbub found that last year around seven million Halloween costumes are thrown away annually. Over £510 million is spent on Halloween costumes each year, but only 4 in 10 costumes are only worn once**. With Halloween now being the third most celebrated festival in Britain***, how much plastic means our planet is at stake?

It’s as scary as you might imagine – as much as 12,500 tonnes of Halloween costumes are buried in UK landfills each year. Of these, only 14% are home-made, and those that are brought new cost an average of £15.56 each **** . But, perhaps more worrying is Fairyland Trust’s finding that 90% of costumes are made from plastic, mainly polyester†. With charity shops unable to sell costumes without flammable warning labels for safety reasons, many of these costumes will end up in landfills.

Another Halloween tradition is to carve scary faces into bright orange pumpkins and then light them with candles. But, perhaps more frightening is the amount of leftovers that end up in the bin. Statistics have shown that if every pumpkin carved was instead eaten last year, then the UK would have enough food to create one scrumptious bowl of pumpkin soup for every single person in the country‡.

More often than not the pumpkin flesh and seeds are disposed of instead of eaten, and the hollow-lantern is later tossed aside, but instead of 5 million pumpkins ending their lives in a landfill, why not compost them instead?

Halloween doesn’t need to be quite so hair raising, at least for the environment. Here are some top tips to keep your Halloween plastic-free yet scarily fun: 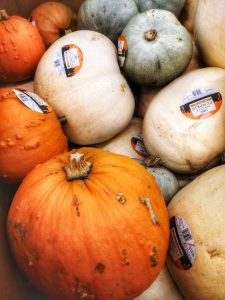